For more than 20 years now, we’ve been committed to making our customers successful worldwide. Complex projects around the globe are our home turf. We’re delighted and proud to be meeting the needs of some of the most distinguished architects, artists and suppliers. Global leaders in the construction and engineering industries trust in our expertise. Our clients are among the who’s who in their respective fields – from architecture through railway technology and art to machine tools. We clear the way for you to find the perfect solution – anywhere, on any scale and in any material. 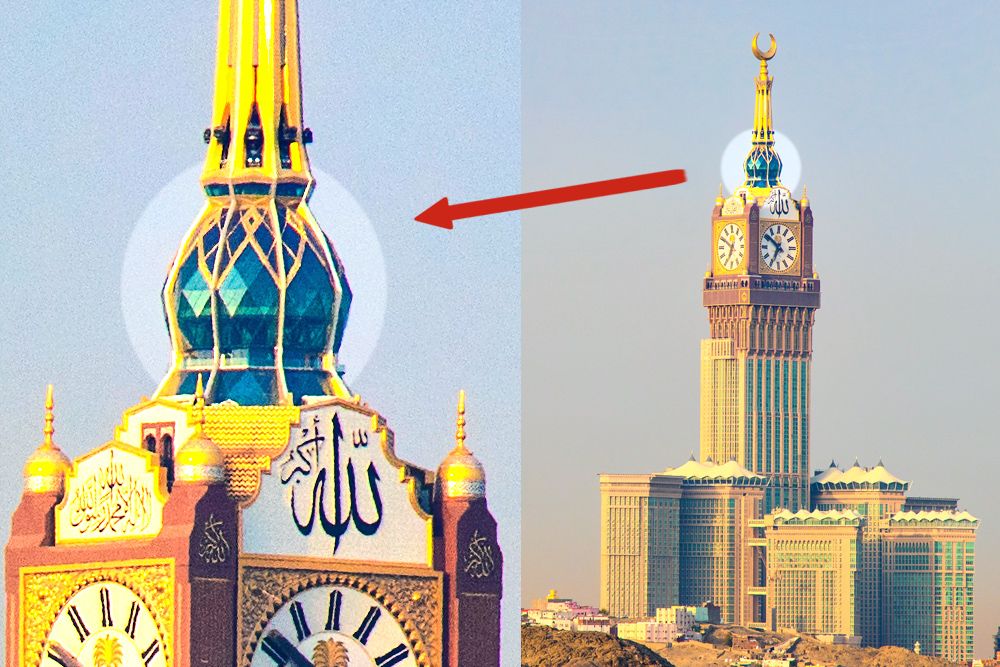 Scope of work:
Jewel-shaped facade structure made from aluminium nodes and bars approx. 580 m above the ground

Client:
RIVA Engineering on behalf of the Saudi-Arabian royal family

The Abraj Al-Bait tower in Mecca is a spectacular, once-in-a-century project and the tallest clock tower in the world.

The clock is crowned by a walk-in, semi-transparent glass “Jewel”. From the outside it is reminiscent of a cut sapphire consisting of more than 1000 glass panes, each 65 millimetres thick.

Approximately 400 tons of aluminium were waterjet-cut by AQUAtec and 5-axis CNC machined to make the nodes and bars for “The Jewel”.

The bars for “The Jewel” above the clock were made from rolled aluminium plates with superior strength and anodizing response. We had a special, high-strength cast aluminium alloy especially manufactured for the nodes. After waterjet cutting and CNC machining, the surfaces of all components were anodized. All necessary specifications and quality standards for structural glazing facades were strictly observed.

One segment of “The Jewel” was assembled at our factory and subjected to customer-specific tests prior to being shipped to the construction site in Mecca. The complexity and diversity of the components for this project were a daunting challenge for our CAD / CAM department and our machinists.

Yet the effort was worth it in the end, as we realized when we assembled it at a height of 580 metres. All the parts fitted together perfectly and the customer had no complaints whatsoever. 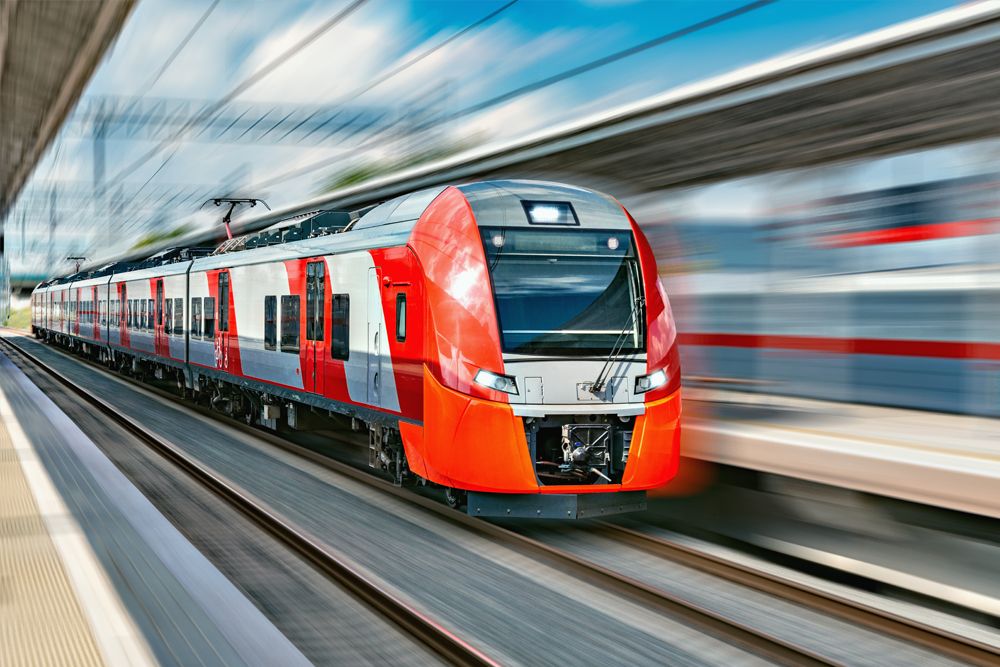 Scope of work:
Machining of the side walls and roof units

The side walls and roof units which had been welded by STEP G from aluminium extruded profiles were intended for Bombardier’s AVENTRA train family.

Where welding distortion had occurred, AQUAtec machined the components in a special jig until Bombardier’s specified tolerances were achieved. Both fixed and floating clamps were used for this purpose.

The special jig was designed and made to measure for the order by AQUAtec. As an additional feature, it was integrated into an XXL quick-change cassette system, meaning the components could be tooled in parallel with unprecedented efficiency.

The parts were also worked manually after machining in the jig, for example rivets and threaded bushes were installed.

The side walls and roof units are used in Bombardier’s AVENTRA train family, which is being put on track as part of a massive infrastructure project in the United Kingdom. 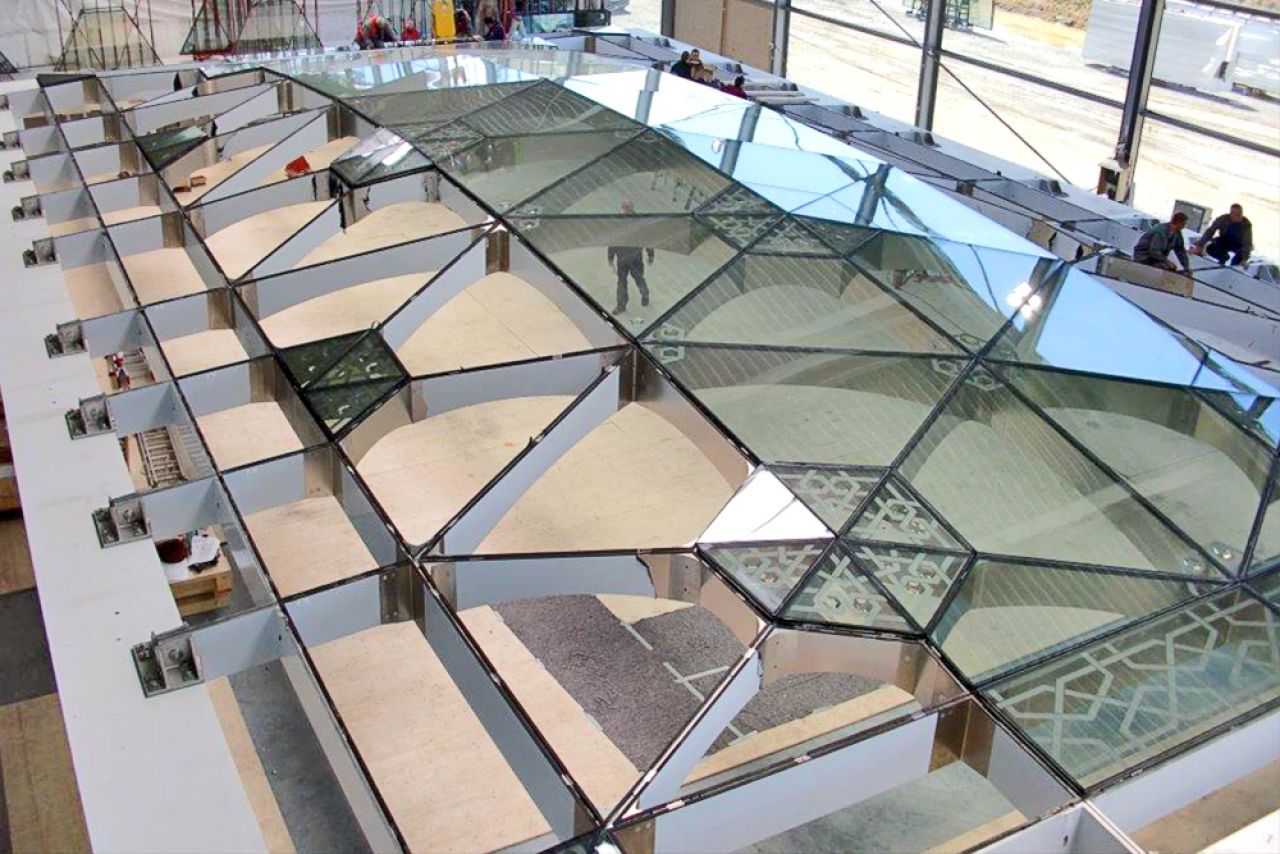 Scope of work:
Bars and nodes made from duplex steel for the movable skylight

Client:
RIVA Engineering on behalf of the Saudi-Arabian royal family

Large, movable domes made from glass and steel and measuring 17 x 28 metres were chosen for the extension of the Great Mosque of Mecca.

These so-called “movable skylights” are computer controlled and can be opened across their entire length and width. In spite of their huge size, they exude lightness and elegance.

Almost all parts were completely manufactured by AQUAtec. More than 2000 tons of duplex steel were needed to make the nodes and bars.

The bars were waterjet-cut from 75 mm thick rolled plates in 1.4462 quality and subsequently machined.

The nodes for the skylights were cast from 1.4468 material and 5-axis CNC machined. All surfaces were then ground and foiled similar to grain size 400.

The first dome was assembled by us on our customer Riva’s premises in Backnang, where customer-specific tests were performed. Twelve movable skylight domes were required for the project in total, all of them manufactured by AQUAtec.

The large number of different components involved presented a particular challenge. Each dome has just two components that are exactly identical. The enormous time and effort that were necessary for milling likewise placed heavy demands on the AQUAtec team.

The fact that the 12 skylight domes had to be completed in 18 months flat in cooperation with our partners further added to the intense pressure.

Yet regardless of the incredible amount of material to be processed (2000 tons of duplex steel) and the highly diverse components, a meticulous approach to work was vital throughout this relatively short project.

All parts had to be fitted together carefully and seamlessly without damaging the high-quality ground surface.

It was an ambitious assignment, which we completed admirably and to the customer’s fullest satisfaction. 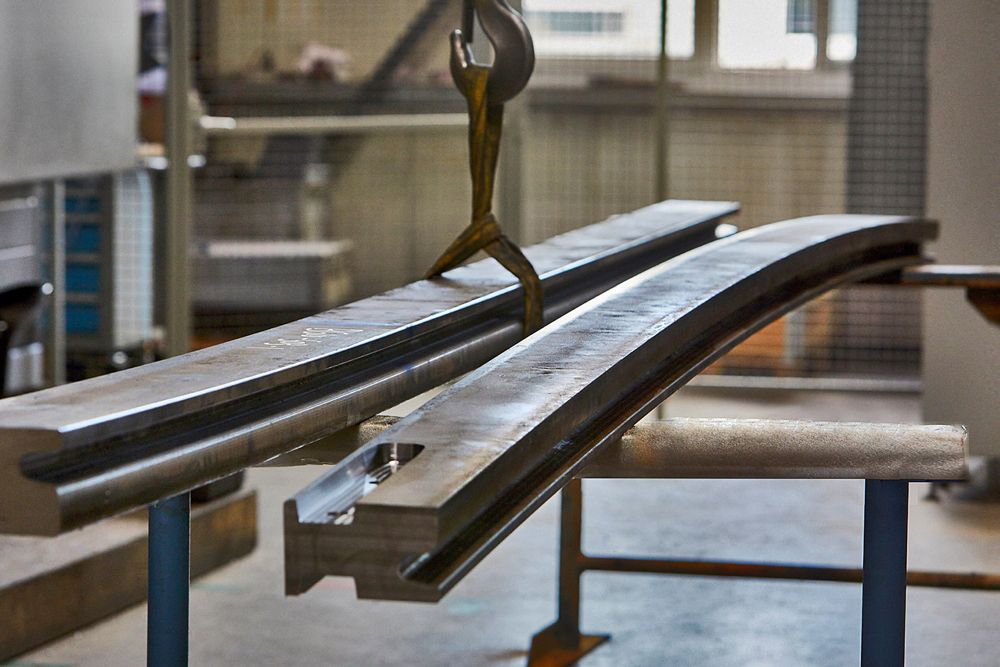 Scope of work:
Waterjet cutting and machining of rails made from Dillidur steel

Client:
Max Bögl on behalf of the City of Amsterdam

Rails made from wear-resistant Dillidur 400T steel were manufactured together with AQUAtec’s partner Kersten Europe to replace heavily stressed tram tracks in Amsterdam.

Our service package centred around two of AQUAtec’s core competencies: material-friendly waterjet cutting, which enabled Dillidur steel’s good wear resistance to be maintained, and machining of the parts, some of which had to be given wheel profiles.

The blanks and semi-finished products were cut by us from 200 mm thick rolled plates. One of waterjet cutting’s key strengths was particularly in evidence here, namely the above-average level of material friendliness.

Our customer could rest assured that the input material’s excellent wear resistance would not be compromised. This added value was a decisive factor for the client and is unique to AQUAtec.

The cut parts were given a profile for the tram wheels on one of our large processing machines.

Following 2D or 3D forming by our partner Kersten Europe, the part ends were machined by AQUAtec to allow them be joined to the standard roll profiles by thermite welding.

The finished tracks were laid by Max Bögl in various heavily stressed sections of the Dutch capital’s tram network on behalf of the City of Amsterdam. 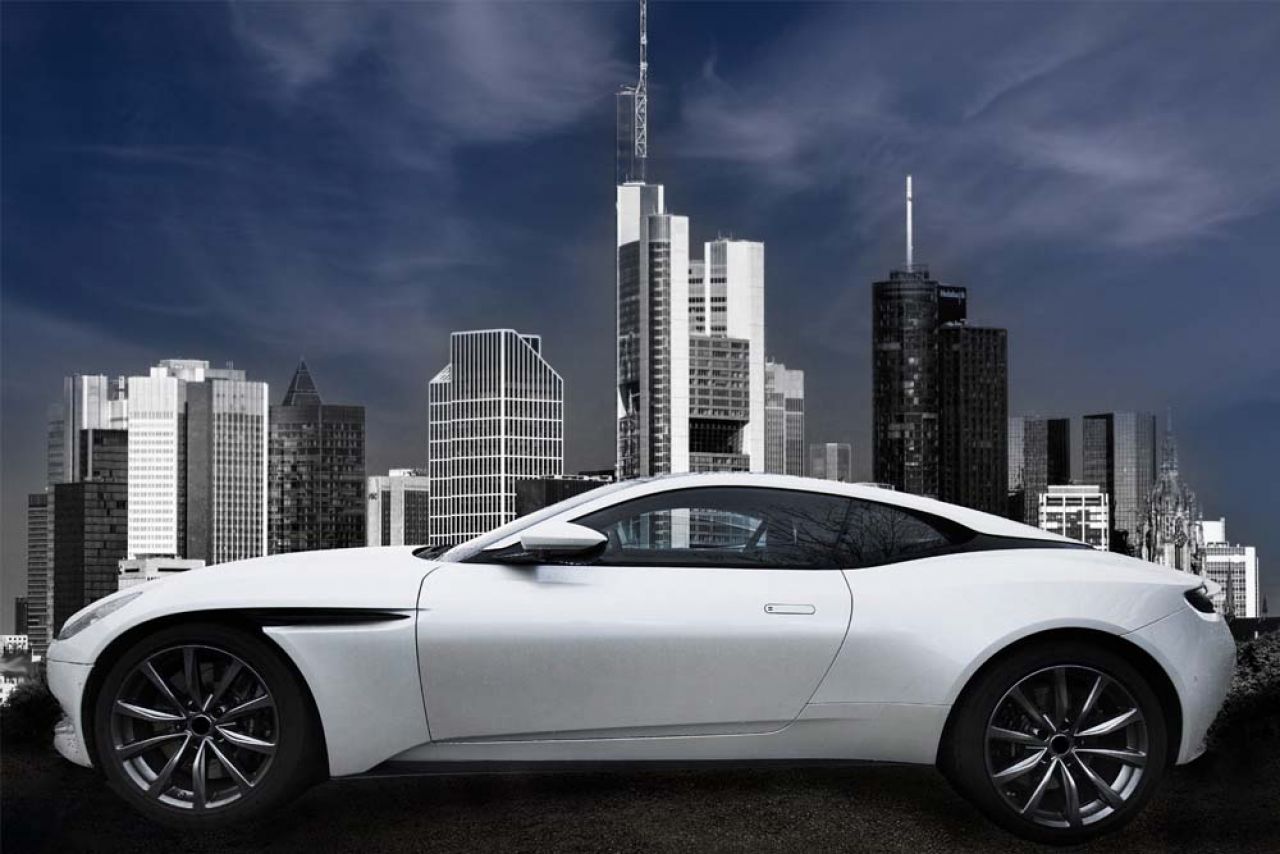 Scope of work:
Machining of the aluminium front and rear frames

The front and rear frames for the Aston Martin Vantage V8 and DB11 sports cars are welded from cast aluminium parts and extruded aluminium profiles.

These parts were machined by AQUAtec absolutely precisely on highly dynamic gantry milling machines, where they were held in floating clamps.

As specific added value for the customer, the start of production for this interim project took place only a few weeks after the initial contact.

Our customer here was thyssenkrupp System Engineering. The project was audited directly by the end customer, Aston Martin Lagonda.

Both our own customer and the end customer were delighted that the design review and production release were ready within such a very short time.

As a result, production got off the ground only a few weeks after the initial contact was made.

Owing to the relatively small volumes in the region of 70 front and rear frames per week, the order was completed with utmost precision and reliability at our plant in Emmerich – without interfering with any other projects. 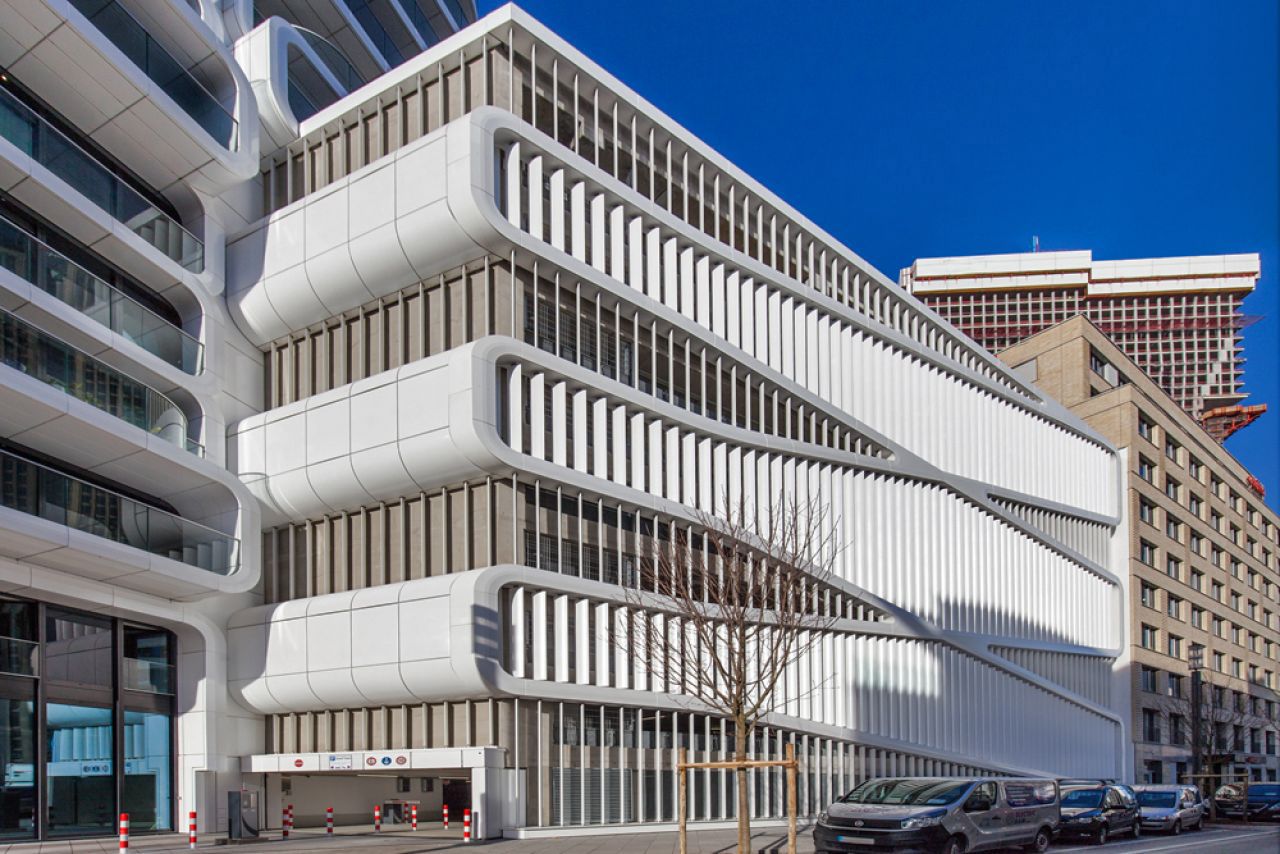 At 172 metres, the Grand Tower at the gateway to Frankfurt’s European Quarter – in the triangle between the convention centre, the bank district and the West End – is Germany’s tallest residential building.

We were charged with the planning and 3D design of the facade for the adjoining multi-storey car park, which has space for 427 cars.

The order also included the manufacture and assembly of the hot-dip galvanized, box-girder steel structure as well as the emergency doors, the facade slats and the aluminium tube cladding. 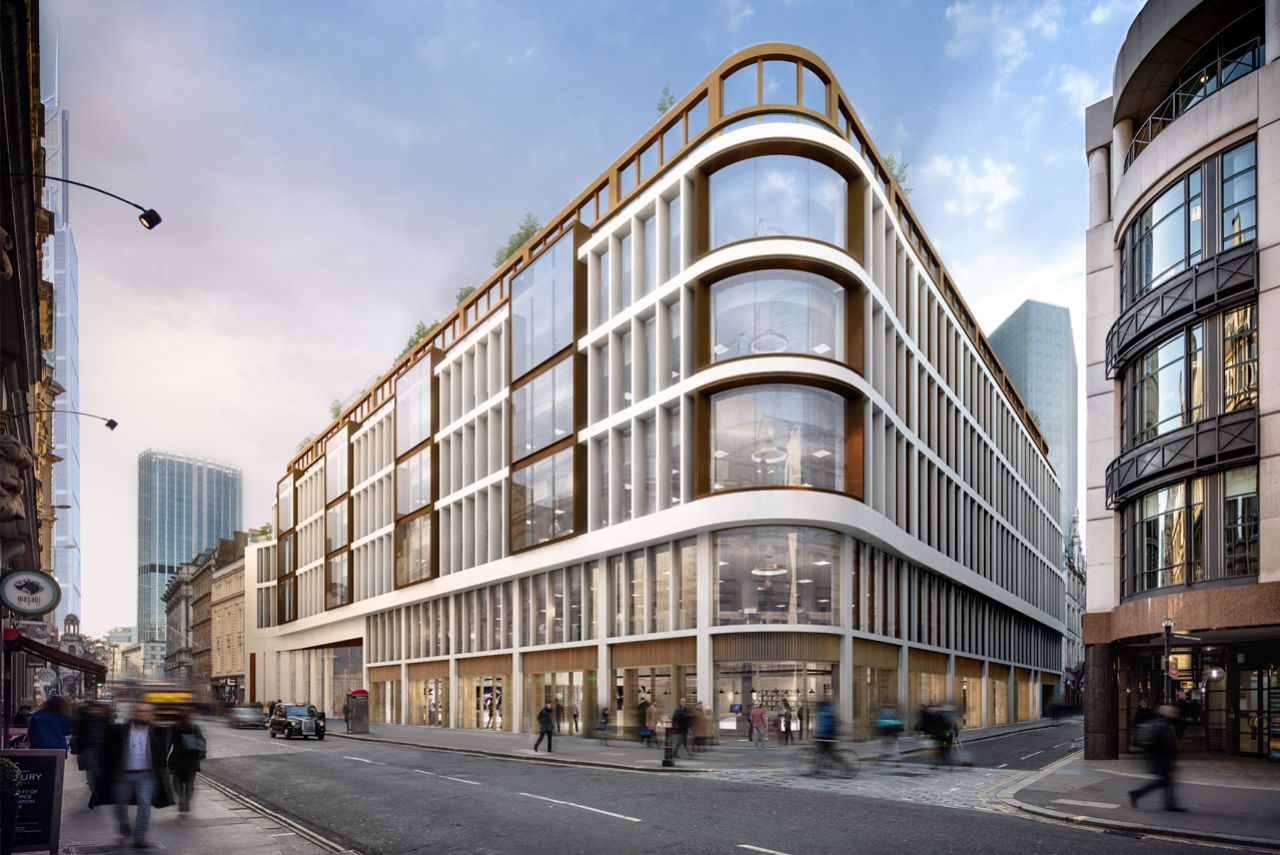 This original, post-modern, six-storey office building in the heart of the City of London is situated between London Wall and Copthall Avenue and was completely reworked and refurbished after being stripped back to the frame.

The project included a structural glazing facade with carrier frames for an overall area of 17,000 square meters.

We manufactured special structures and brackets from high-strength duplex steel (1.4462) for this purpose. 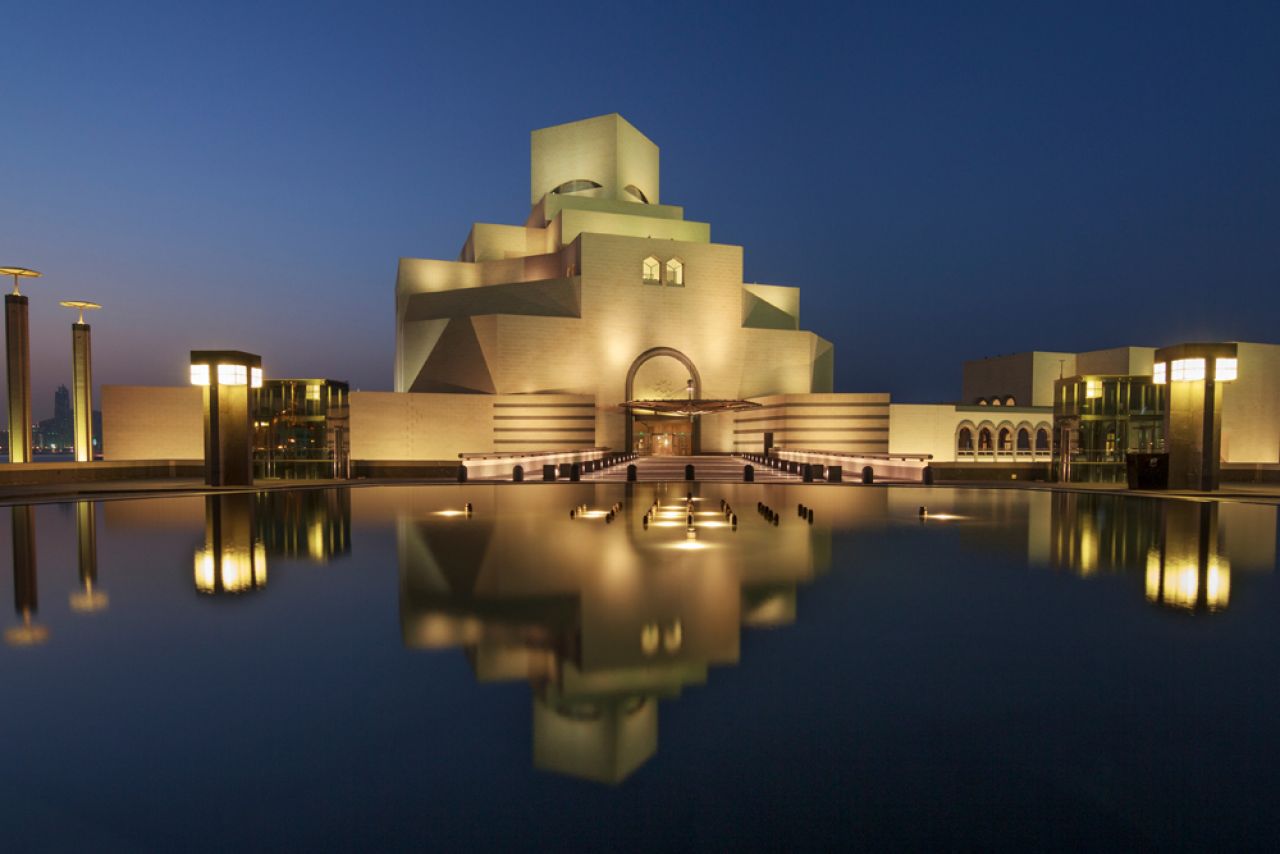 Client:
Lindner Steel & Glass on behalf of the Emir of Qatar

The Museum of Islamic Art in Doha was built in 2009 by Ieoh Ming Pei, one of the world’s greatest contemporary architects, on a man-made island near the West Bay harbour district.

The world’s first museum devoted entirely to Islamic art, it accommodates art treasures of the Middle East from thirteen centuries on about 45,000 square metres of floor space.

AQUAtec was responsible for the design and manufacture of the door systems for this iconic building, including the duplex steel (1.4462) sunshading, as well as for the structural glazing of the door leaves and for the assembly of the doors on site in Qatar.